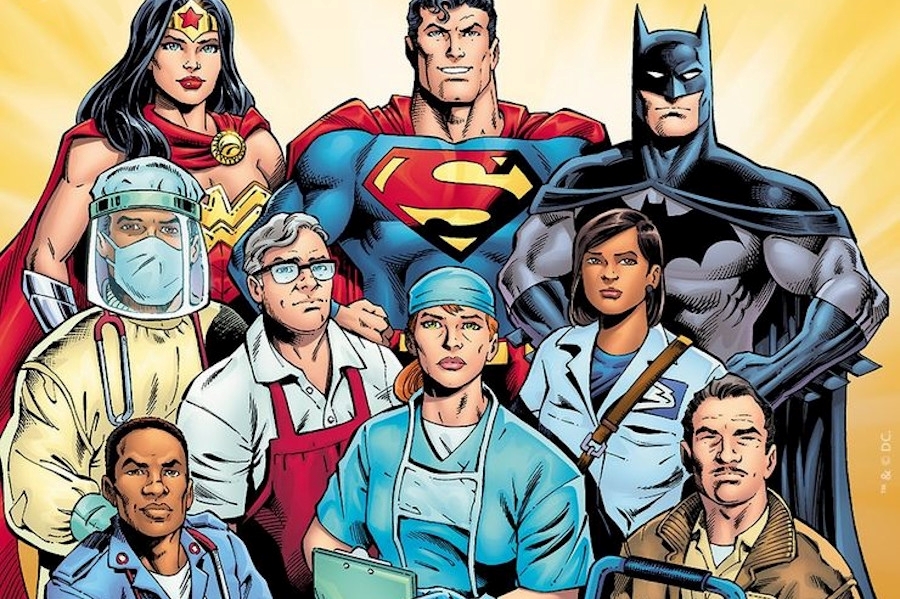 In light of the ongoing pandemic, our eyes have turned to the importance of essential workers to keep us going and in this article I want to highlight those heroes in the comic book collective consciousness that have a dual identity saving the world in the ways we need most right now. Grocery store workers, health professionals, garbage collectors, teachers, and more we owe a debt we can never repay and this list is by no means all inclusive but I hope you’re able to take the time to think of and thank an essential worker today and thank you for thinking of your local comic book store!

It is not an unknown fact that Doctor Strange before he took on the Sorcerer Supreme title was known as a renowned surgeon. But due to a terrible accident in his early years he was no longer able to save lives with a scalpel, but rather with magic. Recently in Marvel comics, he’s healed his hands and has returned to the medical profession in Stephen Strange: Surgeon Supreme written by Mark Waid. He’s taken to mixing both his craft in saving lives in this title and through all of Marvel history has used his knowledge on both of these fronts to save lives. His history as a medical doctor is not utilized terribly terribly often in his history, but I’m glad he’s been putting that degree to good use in recent Marvel years!

Jane Foster at her inception was a nurse and love interest who assisted Dr. Donald Blake (Thor Odinson’s now defunct alter ego) in the Journey Into Mystery Comics, but over the years Jane’s role in comics has changed in the most phenomenal ways. In the films she was an astrophysicist but in the comics she is now putting that medical doctorate to good use and is now a New York City medical doctor as well as the hero Valkyrie. Jane’s heart and compassion during her Thor run while risking her life changing into the superhero while battling a deadly and debilitating cancer, that is what proved her a hero in my eyes. She’s always been smart and courageous before she had powers and she now uses those powers and her medical smarts to help the world. She’s always been one of my heroes, as all medical professionals are to us! If you’ve never read any of her books in the past few years, you are definitely missing out, and now is the perfect time to catch up!

There is no question that our education professionals have had one of the most challenging changes to overcome. As an aspiring teacher myself, I wanted to choose the best example of overcoming adversity in education and in comics. Comic books have always had teacher characters, usually as foils to superhero teenage alter egos but one of the best on this list is a teacher and principal, Jefferson Pierce aka Black Lightning. Jefferson to me, is a true hero in all he does in his books to give back to his community through education and improving his community at a ground level before resorting to using his awesome electric powers. It’s in these times we should thank a teacher for everything they do for us and our families and through it all have kept us going, through a computer interface or otherwise.

Now Willie has not been seen in the comics for quite some time but I have a strong memory of watching the first Fantastic Four film as a child and my dad pointing to the screen when this character hands the mail to Reed Richards and is played by none other than the legend himself Stan Lee in one of his first of many cinematic cameos. Willie Lumpkin is the FF’s mailman and without postal workers like him the comics industry would be completely lost during this time. Willie has gone toe to toe with some of the FF’s biggest foes, including Super Skrull and Dr. Doom and would surely face this current problem in his own loveable bumbling way but with all the courage and heroism we all must in this time. In his later years he was actually a teacher for the Future Foundation so double the emphasis in this list!! I hope we see him in the comics again someday soon!

Our police and firefighters are still risking their lives every day pandemic or no and it was hard to decide on the best representative of them in comic form but I had to honor the great Renee Montoya. Serving as an officer on the GCPD and later becoming my favorite version of the hero Question, Renee has embodied the bravery and grit necessary to overcome all hardships in animated, liveaction, and comic form. She, like many on this list, is proof that you don’t need powers to be a hero. She has overcome so much adversity but no matter what she keeps going. That’s what we have to do, keep going.

Marvel’s Night Nurse has had many names and has been popularized by the Netflix Defenders (cancelled too soon) Universe played by Rosario Dawson. Another version of this character is seen in 2016’s Doctor Strange film played by Rachel McAdams but nonetheless no matter who plays her, the Night Nurse is a dedicated physician and the original comic series didn’t feature any superheroes but on the struggles and dangers of working as a healthcare professional (along with some uncovering mob schemes plots.) But as the character evolved, she became a character who specialized in the treatment of superheroes in the utterly fantastic Bendis/Maleev run of Daredevil. Though a minor character in comics, her heart and commitment to doing the right thing still makes her so relatable to the human empathetic spirit we need to make it through.

Green Lantern is one of my favorite DC properties due to the idea that the power of good will always banish the darkness and having hope and willpower will always ensure that you are going to make it even through the worst of times. Another aspect of them that I love is the diversity of the Lanterns and their strength even in their dual identities. One of those who defies expectations of her is Sinestro’s daughter, Soranik Natu. As a Korugaran neurosurgeon Sora has always had the heart to help people, using her power ring to craft surgical equipment and using her power for good. Even to the point of uniting the Sinestro Corps and Green Lantern Corps in Hal Jordan and the Green Lantern Corps series, she is a fierce leader and doesn’t let her lineage control her destiny. This may be a hokey thing to say but one of the main reasons I had to put a lantern on this list is to remind us all that this blackest night will not last forever. As long as we remain strong, support those in the real world like the ones listed here, and keep our distance for just a little longer then we will be okay. We’d like to thank all of our customers for their patience with us as we’re adjusting and we’re so grateful to have your support. Our stores are open and if you want to read about the heroes in this list, come on in wearing your mask and we’re so happy to be able to see you again! Excelsior!