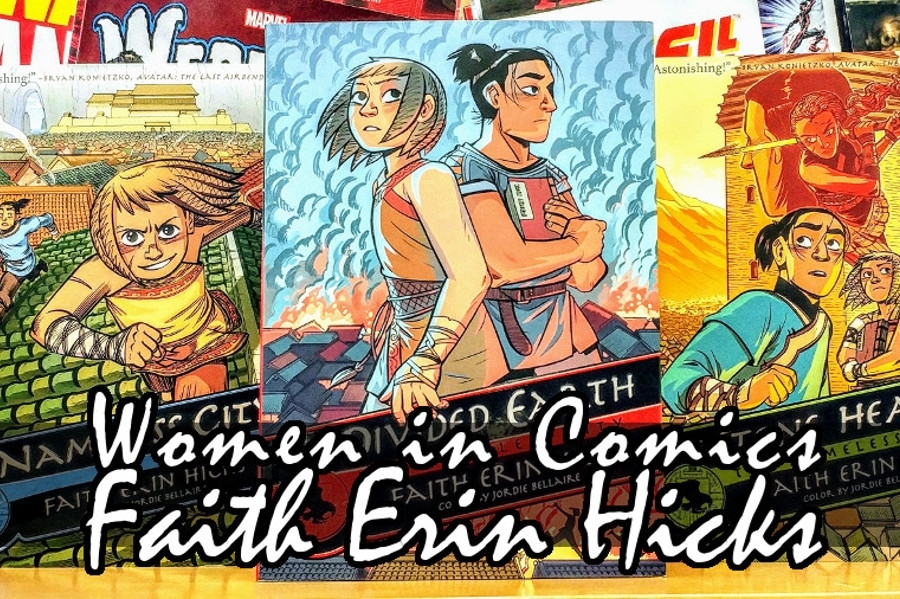 From webcomics to newspaper comic strips to graphic novels, Faith Erin Hicks has done it all, and she’s doing it again and again! This time with the epic conclusion of the Nameless City trilogy!

The Nameless City (2016), The Stone Heart (2017) and The Divided Earth (2018) written and illustrated by Faith Erin Hicks, with colors by Jordie Bellaire

In the Nameless City, conquerors come and go, but when a boy named Kaidu from the newest conquering nation meets a native girl named Rat, they discover a plot to overthrow the current King and upset the delicate balance of not only the Nameless City but all of its bordering nations. 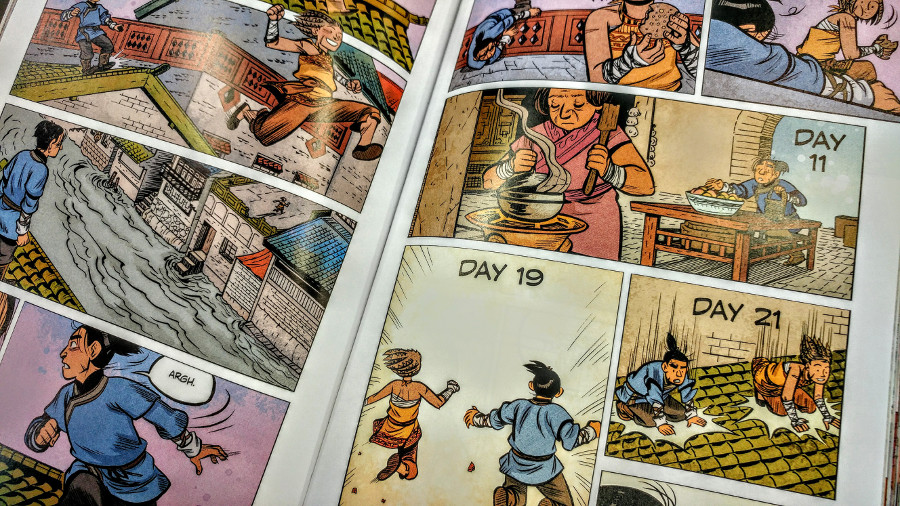 This trilogy is rife with political intrigue, backstabbing, political backstabbing, ancient weapons thought long forgotten, more backstabbing and did I mention backstabbing? No one is to be trusted because everyone is trying to claim the Nameless City as their own. From rocky beginnings, Kaidu and Rat find it hard to trust each other, but even despite their cultural differences - one being from a conquering nation, the other a native of a city whose legacy is to be conquered - discover that they are the only ones in the entire city that can stop a coup that will spell disaster for the entire world. Throughout all three books, Kaidu and Rat’s trust in each other builds and blossoms, showing that no matter how we are raised, or what our backgrounds are, we can do amazing things when we can put those differences aside. Maybe I got a little too mushy there, but there’s no denying the underlying theme.

This series is packed with action and drama and does not shy away from the dark underbelly of a corrupt political environment. Hicks pulls no punches as she takes on her roller-coaster tour of the Nameless City, showing us that sometimes good doesn’t conquer all and we’re left in an emotionally vulnerable state trying to pick up the pieces of our hearts left shattered at the end of the ride.

And where would we be if we didn’t at least acknowledge Jordie Bellaire’s coloring throughout the series. I’m a huge fan or earthy tones, and Bellaire does not disappoint. Though the Nameless City itself is muted with browns of all shades and tints, the characters pop with color, from Kaidu’s Dao nation uniform to Rat’s yellow jumper to everyone else in Nameless City, giving each and every character has their own distinct characteristics brought to life by the flawless combination of Hicks’s artwork and Bellaire’s colors.

Faith Erin Hicks is always working on something amazing, which you can learn more about on her website. If you want to check out more of Jordie Bellaire’s work, you can check her feed on Twitter and even leave her a message!

You can get all three volumes from any one of our locations for only $14.99 each.